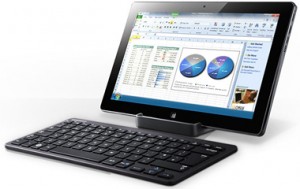 I bought the new Samsung Series 7 slate PC on my birthday. It’s an excellent product! My intention is to replace my notebook and iPad with this slate. I wanted to have a “Tablet PC” that is running with a Windows OS and not with iOS. The problem I came across with the iPad was that I couldn’t use the applications I was used to. I was very much dependent on the available apps. On the other side, on my laptop I can use all needed apps. But I’m not that mobile as I am with a tablet PC. Therefore the slate is the perfect mix between a laptop and a tablet/iPad.
What I especially like is using OneNote 2010 on the slate. I started to write my notes digitally and not anymore on paper. The Ink to Text function works like a charm! I will add more information to my blog as soon I can find some time.