In case you run Slack on a Server 2016/2019 with Citrix VDA installed (in my case it’s version 1906, latest version available at that time), you will most probably observe that Slack won’t start or start with a long delay (15mins). That behavior changed after I updated from version 3.3.8 to 3.4.x. Rolling back to 3.3.8 fixed the issue, so it looks like it’s an issue with the newer version. In the meantime version 4.0.2 is out and the same issue exists. Also other slack users reported the issue on Twitter (i.e. https://twitter.com/phil_wiffen/status/1138778963281633280). So it was about time to have a closer look at the issue.

Let me show you how I tackled the issue: One could observe Slack.exe crashing many times when started. OK – time for a crash dump analysis. I enabled a full dump for slack.exe (see https://docs.microsoft.com/en-us/windows/win32/wer/collecting-user-mode-dumps for how to configure that) and then restarted slack.exe. You will see a process dump being created almost every second. It was time to open one in WinDbg. I used WinDbg Preview which got modernized compared to the well known classic WinDbg version (btw – make sure you set the symbol path). The command I usually execute first is “!analyze -v”. One of the outputs is the stack at the time of the crash (you would also get it by the kb command):

As you can see there was MfApHook64.dll involved right before the crash happened. MfApHook64.dll is a Citrix dll that hooks itself into almost every process. There is a high probability that it’s causing the crashes. OK, so let’s exclude slack.exe from the Citrix API hooking that is done by MfApHook64.dll on x64 systems. There’s a good Citrix article that shows one how to do so: https://support.citrix.com/article/CTX107825

Make sure you reboot your system after the reg change. Slack works perfectly right after the reboot. That’s it…

Update 30.09.2019:
The issue is finally fixed in fslogix 1909: “Issue corrected that could cause autosave to fail with OneDrive.”

Update 25.07.2019:
Finally Microsoft/fslogix fixed the issue. The development team found this is a problem with a value that OneDrive uses to open files that are cached by the FSLogix frxdrvvt driver. It’s timing out the fslogix cache entry too quickly. To fix it, create these two registry values and reboot the system:

I’m so happy that this issue is now fixed (and my customers as well). I don’t know yet if this issue will be addressed in a next fslogix version, but I hope so.

Original post:
As you probably know, fslogix has been acquired by Microsoft and beginning July 1 2019, the fslogix product is now finally available for many Microsoft customers. You can read more about here: https://www.microsoft.com/en-us/microsoft-365/blog/2019/07/01/improving-office-app-experience-virtual-environments/.

When you follow all the social media channels, you will see many thumbs up for the fslogix products. I agree, fslogix solved a problem many of us working in the EUC field, have had until fslogix was there. Using apps like Onedrive in a virtual non-persistent user environment was challenging and that was one of the reasons why Microsoft decided to acquire fslogix. It’s a needed puzzle piece in order to have Office 365 ProPlus with Teams, Onedrive etc. working properly on Windows Virtual Desktop. That sounds all good, right? Yes, indeed, but….there is still a known issue when you use fslogix O365 containers. If you use Windows 10 1709 or 1803 (I didn’t test newer version, but assume it will be the same) with Onedrive and the files on-demand feature enabled, you will get into troubles when you want to save existing Office documents located on Onedrive. Usually it works the first time with a new document (or a document that hasn’t been downloaded yet). If you open an existing Office document that has already been downloaded modify and save it, you will get the following error message:

You won’t be able to save Office documents any longer. Means you cannot use fslogix O365 containers in production if your users need to modify Office documents on Onedrive when the files on-demand feature is enabled. Note that other files like .txt files aren’t affected. A possible workaround (if I’m allowed to say that this is a workaround) is to disable the files on-demand feature by Group Policy. Then everything works as expected. The result will be huge vhd files because most of the users will sync their complete Onedrive folder (default max size is 30 GB per user vhd file).

I do have an open fslogix support for that particular issue for 10 months and it’s very challenging to make any progress as I guess the integration of fslogix into the Microsoft organization takes much higher priority for them and is of course also very time consuming. At least fslogix confirmed this is a bug that either the fslogix dev team, Onedrive dev team or both have to fix. So it won’t be as easy as it looks like to fix it. I was hoping it will be fixed with the first “Microsoft release”, fslogix 1907, but unfortunately it’s not. But the behavior seems to be a little different. With fslogix 1907 when you try to save a document a few times in a row, it will save the document after a few tries (still Autosave doesn’t work). That’s better than before, but still not ready for production. I’m really wondering how many people use fslogix O365 profile containers in production in the mentioned environment. I guess not many, otherwise much more customers would have reported the issue. I believe most of the customers is fslogix O365 containers on Server 2016 and because the files on-demand feature isn’t supported, the issue won’t be seen here.

Conclusion: fslogix developed a fantastic product, but unfortunately O365 container won’t work properly on Win 10 with Onedrive files on-demand feature enabled (yet). Due to the official Microsoft announcement of the new fslogix 1907 version and a clear communication about the fslogix use rights, there will be a lot more customers going to implement fslogix O365 containers. Please be aware of the mentioned bug that isn’t fixed yet so that you won’t get in trouble when you start to use in production.

I will update that post as soon as I do have some news. Stay tuned.

Recently I upgraded to Storefront 3.9. Setting the default Website no longer works in that verion: 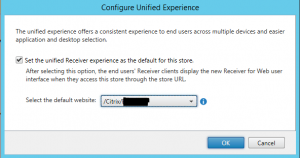 Disable the setting and enable it again won’t make any difference. That setting configures the web.config file in the root folder of IIS (c:\intetpub\wwwroot\web.config). As a workaround you can configure it in the web.config by yourself. Just add the following config:


Replace the destination value with your Website of the store and you’re done.

Back in 2014 I posted about these z@ tmp files that are sometimes created by Adobe Acrobat (or Reader) in the temp Folder and cannot be deleted anymore afterwards because they are still in use (see post here).

When you migrate to Storefront 3.0, you probably will see that the customized delivery Group Icons are gone. There’s an Powershell command that brings those icons back, just run it on the Storefront Server:

Note that you might have to Change the paths according to your Installation.

Yes, Microsoft Ignite (http://ignite.microsoft.com) is finally starting in a few days in Chicago! I’m looking forward to meeting you guys over there! See you soon….

Recently we upgraded from XenApp 7.5 to 7.6 and figured out that the logon experience is worse with 7.6 when starting a published application (i.e. Internet Explorer).

In the meantime, Citrix published a hotfix (ICATS760WX64009) that solves the issue: http://support.citrix.com/article/CTX142036

I bought the new GoPro Hero 4 Black edition camera in order to make some recordings during my Australia trip that will take place the whole January 2015. After installing GoPro Studio, I observed a constant high CPU usage (20-50%) caused by WMI Provide Host. That high CPU usage was caused by GoPro Importer. It’s a startup executable that constantly checks if the GoPro cam has been plugged into the computer. After having removed it from the startup list, the issue disappeared.

Part or all packages publish failed.

published: 3
failed: 1
Please check the error events of ‘Configure/Publish Package’ before this message for the details of the failure.
Event-ID: 19104

You have a dump file and need to get hostname of the system that created the dump? Use the following command in Windbg: !ustr srv!SrvComputerName

See the articel from Alon for more information: http://social.technet.microsoft.com/wiki/contents/articles/18758.fetch-computer-name-from-windows-memroy-dmp-file-using-windbg.aspx